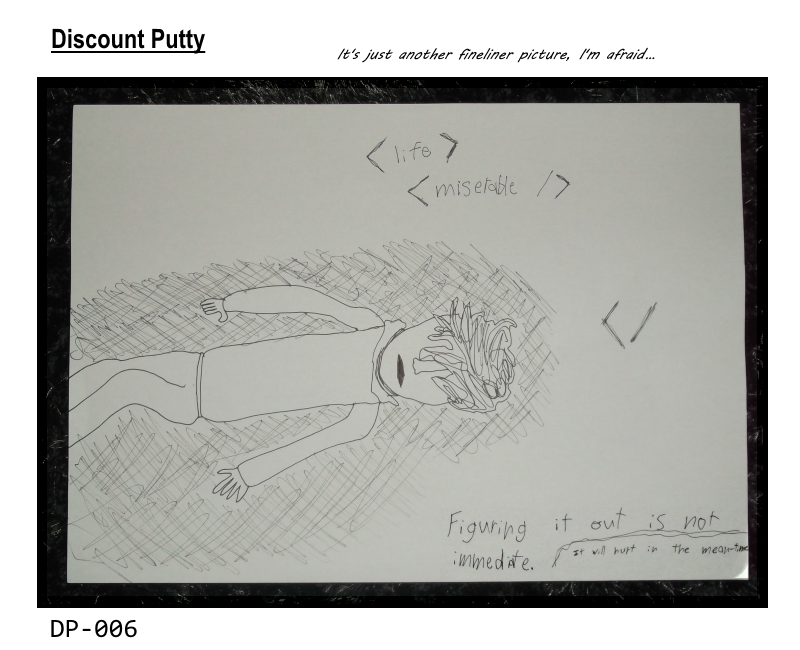 So, this is happening again. The first time I posted a hand-drawn fineliner picture on here, I was feeling terrible, I was behind schedule, and I couldn't draw the same way I wanted to.

That comic was a drawing of a Creeper waiting inside a dark cave, Minecraft style. The photo was so dark and uncontrasted, that I don't think anybody could actually see what was going on.

The point was that some guy was inside a cave, and he wasn't alone. Because there was a Creeper right there more than ready to blow itself up. Some people I met in real life misinterpreted it. One misinterpretation was that the drawing was about the Creeper, and the Creeper was sad, and that the Creeper was not alone and could be helped. Enigmatic as it may seem, a Creeper is the most suicidally violent creature I've ever met in a videogame, and people still imagine them being a tragic being who needs love.

I suppose maybe they just... Are tragic. The thing about them and the game they're from is that they're totally up for interpretation. But I don't think anybody can interpret them as not being the thing that walks up to you and explodes.

I was in a horrible mental state when I made that picture. Depressed, thinking unclearly, under pressure, things like that. It was no physical injury. I've never really had one of those. I've never broken an arm or fell down stairs or otherwise severely damaged my physical form.

The problem is my brain. I have great capacity for imagining things, coming up with fictional ideas, and envisioning what I want to end up on paper or inside animations or just as comics like I've done with this website here.

It's the real world that I struggle with. I cannot for the life of me imagine how all the 'competent' people do it, how they get through education, how they get a job, how they suppress the various difficulties of living properly, and just generally how they have it all figured out. But do such people exist? Maybe not. I suppose if they exist, there's hope. If there's no such thing as people who have life sorted out, perhaps I'll see the world clearly and/or fall into despair.

After the submission of that erroneously produced image, I left home for about a week. I got home just in time to finish another comic for the ending week, and I still didn't. That was when I broke a strict self-imposed webcomic schedule for the first time ever. I stayed away from Crack Putty for a while. I think from now on I should take those breaks more graciously, and that's the 2015-Me talking.

The comic above is similar and different from the one about a dark cave with a creeper in it, but I'd rather not explain exactly what it is right now. I'll just quickly point out that while I would have preferred to continue the story arc about the interspecies, interuniversal, and internet meeting of different stick people, Paint Tool SAI wouldn't start up. That's a problem in itself.
User comments:
Post a Comment
Seabiscuit 14.3.2015
edit delete reply

(Dang. I can totally understand, though. I don't understand how people do it either, how to be "normal".)
You should just take a break if you need it, mate.D:
Post a Comment